Augmented reality (AR) is not new to American football viewers, although they may not realize it. Introduced in the fall of 1998, the 1st & ten line has allowed television viewers to know the spot the offensive team needed to advance to gain a first down. While the yellow line has become a ubiquitous part of watching football, it barely scratches the surface of what augmented reality can do to entertain guests and enhance their knowledge and engagement with live sporting events. Whether its cartoon animals bouncing around the field, full access to a wide range of stats, or a clear path to the shortest beer line, the possibilities are endless.

In AR, visible light and depth cameras scan and collect data from the physical environment. The data indicates the object’s orientation in space and measure its speed, angle, and direction. Tools such as accelerometers and motion sensors further define the environment in which images will be superimposed. This information must be processed into a format that can be projected with an AR- enabled device.

An AR-headset or a mobile phone can capture processed data and projects it into the viewing area using a machine learning algorithm. The algorithm uses pixels from images captured as a reference to determine the identity of certain objects in your view. It can also combine stylistic elements that enhance the viewing experience.

AR provides a variety of benefits for guests starting with the ability provide the information-rich experience that’s typically reserved for television viewers. With the help of phone apps, player statistics such points scored, or yards gained can be continually present while watching a game. Additionally, items such as pitching velocity, kicking angles in soccer, or whether a shot was inside the line in tennis can be seen. Instant replays can be viewed and guests can see for themselves if the football crossed the goal line. AR can also be used to enhance fan knowledge of sports such as golf or cycling where course specifics, including elevation, distances, and speed can be displayed.

AR plays a role in wayfinding. VR codes can be scanned to trigger an AR-rendering of map that takes you from your location to your seat. It can also take you to the concession stand or the shortest bathroom line (using tracking data). However, AR’s most visible venue application is entertainment. AR take intermission games to a new place with interactive competitions that allow fans to shoot baskets or battle fans in a race against time to find clues and solve a sponsor-related puzzle.

Aside from its wayfinding possibilities, AR primarily serves a fan engagement role for sports venues. It’s a role that can be replaced by less technologically intensive tools. An app can simply provide up to the minute stats or wayfinding. AR requires a heavy tech infrastructure investment. In many cases where AR is being used, “a 5G network is necessary to facilitate it, which for most facility projects is cost-prohibitive.

It also requires an understanding of the type of information and experience you want to provide guests. One-off experiences like the Carolina Panthers’ pre-game AR presentation of a giant panther bouncing around the stadium requires less planning than up to the second stats on each player on the pitch. However, if the investment is made in the pre-development phase and AR is executed in your facility, it will be the type of amenity that few facilities will be able to compete with and will stand out in the minds of guests.

The NFL and State Farm Insurance launched a sponsorship activation with a fun VR game available online and at several locations in Kansas City, MO including Arrowhead Stadium. After a short registration, fans used their phone or tablet’s camera to capture up to 1.3 million AR footballs for a variety of prizes, including non-fungible tokens (NFTs). 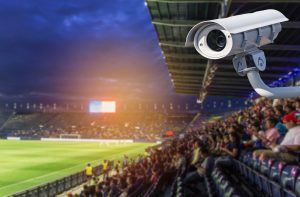 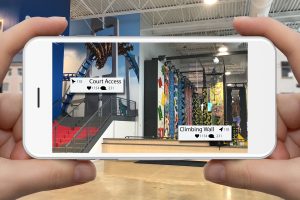 January 17, 2023
PrevPrevious PostWhat Cities Need to Know When Developing a Sports Complex
Next PostSecurity Technology to Protect Your Facility, Employees, and GuestsNext